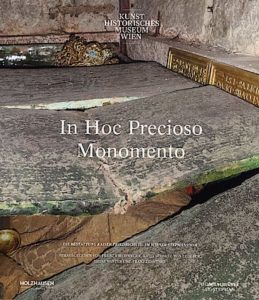 I hope this message finds you healthy! The whole world is experiencing dramatic times due to COVID-19. Many of us have to stay at home. I am aware that the world stands upon its head but probably it helps if we share some „normality“ via the blog. Please feel free to get in touch with me (blog-editor@cieta.fr).

Probably the following information about a new publication is of interest for some of you.
—————

Gazing into the Tomb. A Research Project on the Burial of Emperor Frederick III in St Stephen’s Cathedral
A collaboration between the Kunsthistorisches Museum Vienna and the Dombauhütte zu St. Stephan

Both robbers and historians have always been interested in the tombs of former rulers. Only one from the fourteen burial sites of late-mediaeval kings and emperors of the Holy Roman Empire was never looted, disturbed or altered: that of Emperor Frederick III (1415-1493) in St Stephen’s Cathedral in Vienna.
In 2013 a tiny camera was inserted through a small opening in the outer wall of this famous sarcophagus. These sensational photographs document the most elaborate interment of a medieval European ruler ever discovered. Three curators of the Kunsthistorisches Museum Vienna – Franz Kirchweger, Katja Schmitz-von Ledebur and Heinz Winter – were invited to collaborate on the study of this first-ever documentation of the tomb’s funerary equipment.

A comprehensive scholarly publication of the findings of this research project has been published in December 2019. The publication includes – inter alia – an article on the fabrics found in the tomb.